I have always loved to draw. Since I was young, the creative spark in me meant I would spend hours with my Crayola felt-tips and colouring pencils creating pictures upon pictures. Admittedly, they were not works of art but I still enjoyed it. If I do have a regret about my A-level subjects, it is probably that I should have picked Art as one.

However, the thought did not actually occur to me when I began college. I was too focussed on getting my dad to agree to me NOT doing any maths or science subjects so Art hid in the back of my mind, classified as an extreme, too crazy to even think about.

I joined the art club in college last year but it was in all honesty, a catastrophic failure. After a few weeks of working with clay, a new teacher came in who merely said do what you want and provided no sense of direction. So I left and never returned. Another reason why I probably never seriously considered studying Art was because I have never considered my works to be well, art worthy. I do not really draw much anymore but I love to draw in graffiti style. This does not mean going around with a spray can but merely doing it on paper.

In my previous post, you saw an example of this and I gave the opportunity to three people to request one of their own. Only one person responded! Perhaps you were feeling too shy but seriously, ask away! All I ask in return is if you do use it on your blog, then simply provided a reference to mine. 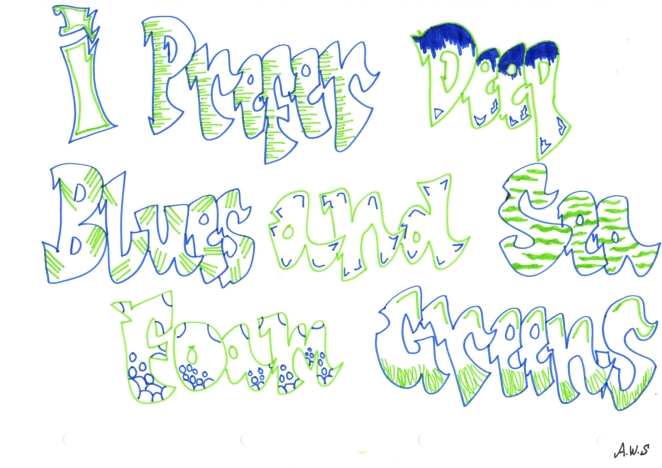 Hope you like it! The blue was meant to be a bit darker.

So if you would like one for your blog then simply ask! 🙂
I have been doing these since I was young, although it took alot of practice and paper to get to where I am today. When my little brother tries to copy me, he becomes frustrated when it does not turn out the same. Little does he know that my previous childhood attempts would make me cringe!
If there is a greater deal of interest in this, then I may upload a video of me creating one which does not take long. (excluding the inner detail of course!)

So until next time,